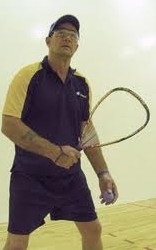 Warren plays on the University of Washington’s racquetball courts a few weeks after video-assisted thoracoscopic surgery. His lung surgeon agreed to put off the VATS for a week so Warren could compete in the International Racquetball Championships.

I stay in the game. Some people might say I do more than that — I won the gold medal at the International Racquetball Championships at age 67, while drawing a Social Security check.

But for me, “staying in the game” means the transition my life has taken since my doctor told me that I had leiomyosarcoma, or LMS, in my right thigh, and that it had spread to my lungs. I was stage 4 and incurable.

Everything — my business, family and, of course, my competitive racquetball — came to a standstill. The life that would last forever with few worries ended suddenly. My new life began with no goals or direction, only fear.

Because LMS is so rare, Alaska hospitals were not qualified to give me the proper care and treatment.  My wife and I spent a good part of the first five years at the Seattle Cancer Care Alliance and the University of Washington Medical Center. We were trying to catch up to the cancer.

While recuperating from my first surgeries, I read a book by Lance Armstrong that  had a tremendous impact on me. I decided then and there that I was going to survive, and that I needed to face this beast head on. I also wrote down a quote from Dr. Seuss:  “You have brains in your head, you have feet in your shoes, you can steer yourself in any direction you choose. You’re on your own. And you know what you know. You are the guy who’ll decide where to go!” 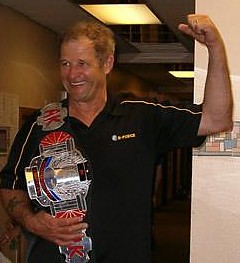 Warren won the Alaska State Championships in all ages, “not just with old people like myself. It was my first big accomplishment since having so many surgeries on my leg. Two years later, I won again after lung surgery.”

It has been 11½ years since I made up my mind to stay in the game, and not let this disease change my life, except in the direction I want. No matter what course this cancer takes, I’ll meet it head on, as I’ve done so many times before.

For the past three years, I have medaled in every national and international racquetball tournament, competing against players from many countries. I’m ranked fifth in the world in my age category.

As I travel the country, I meet, talk and try to help survivors of sarcoma and other cancers and caregivers. Racquetball has given me the opportunity to get the word out on sarcoma through speeches, newspapers, magazines, television and my annual “Slaying the Beast” racquetball fundraiser in Anchorage. It has become Alaska’s largest racquetball tournament, with many participants playing only because it’s a way for them to help fight cancer!

At the 2012 Huntsman World Senior Games, Warren won a gold medal in softball as well as a silver and bronze in racquetball.

Since July 2010, we have had a very large softball tournament in Alaska to raise money for sarcoma, and I hope we can have more racquetball tournaments across the country.

Before cancer, I played racquetball for me. Now I play it to help fight cancer. Like so many other people, my only hope is to find a cure. Otherwise, I will be fighting sarcoma for the rest of my life. Helping people with cancer is, and will be, my main purpose, no matter which direction my cancer goes, good or bad, for as long as I live.

My family has made me so proud with their love and devotion. I’ve come to realize that my grandkids look to me with respect, and handling this disease will be another lesson in life that I can teach them.

In the new life that God has extended to me, I have become a board member of the Sarcoma Alliance. Thank you very much for allowing me to tell my story.

Here is an interview with Warren: http://www.youtube.com/watch?v=_2epwNS63Ow Here are two longer stories: http://www.seattlecca.org/patient-story/warren-bailey.cfm and http://www.adn.com/2011/07/16/1971251/bailey-brings-education-of-his.html To donate in his honor, go to: http://sarcomaalliance.org/donate/donate-now/