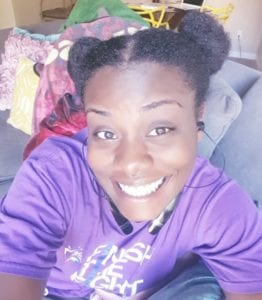 Hello everyone. It’s an honor to be here speaking to you all today.

It wasn’t very long ago that I was attending my first Relay for Life as a survivor.

It’s hard to go back to the day that I had to decide to be a survivor and not a victim of this disease, but I think everyone who is encountered with those words “You have cancer,” immediately decides what type of battle it’s going to be. And anyone who decides to put up a fight is a survivor. Since I served in the Marine Corps I had the mentality to be a warrior so there was no other choice but to be the warrior they had instilled in me to be.

I heard the words “You have cancer.” on two different occasions while serving in the Marine Corps. The first time was while I was on deployment and we were at port in Iwakuni, Japan. We had just left Hong Kong and that’s when all the symptoms came to the forefront because they wouldn’t be ignored any longer.

People like to think they’re invincible but not on purpose. We do it out of this mentality that is instilled in us to protect us from our worst fears, our fear of being weak, vulnerable, and not like everyone else. Marines are trained to be tough, be resilient, don’t sweat the small stuff, and push through any obstacles that stand in your way.

That’s why while on deployment when I noticed the knot that had formed just below my knee I pushed it to the back of my mind. I decided that it was nothing even though I had been having knee pain. I just kept making excuses. I am the biggest advocate of driving home the importance that we have to take time to listen to our bodies and not our minds. We need to realize that all things can’t be explained through Google and all things can happen to you. 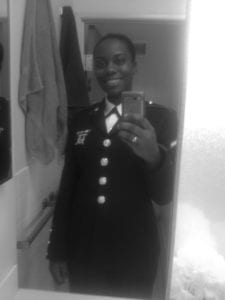 A friend of mine, who was also a Marine, said to me. “Carr, I’m really worried about you. You should go to medical.” She said this to me because while we were leaving Hong Kong I could barely walk. The pain in my bones had gotten so bad it was excruciating to take a step. It wasn’t until she agreed to go with me to medical that I made the decision to seek help.

I know for a lot of survivors it takes a loved one or a friend to say. “I care about you and I’m worried.” before we make the decision to seek help. If it were not for those people who take the time to notice and to care, we would lose a lot more people to this disease. Thankfully my battle buddy decided to speak up and thankfully I decided to put my pride to the side and listen.

We went to medical and things happened very quickly from there. I got x-rays in Iwakuni due to the ship machine not being good enough. I remember the x-ray tech coming in and asking me if I had fluid in my knee. I knew then that there was something wrong and I wasn’t imagining things but cancer was definitely not on my list.

It wasn’t until a misdiagnosis and a CT scan later that I got called into our flight surgeons office. I remember him telling me “You have Parosteal Osteosarcoma”. I didn’t know what the Parosteal part meant but I had taken some medical terminology in high school so I figured out that osteo was bone and oma was tumor. I was shocked. I was just having the time of my life seeing new countries and meeting new people and then I get the news that something is seriously wrong.

After listening to other survivors stories most of the first thoughts don’t have anything to do with, okay I have cancer how am I going to get through this. We’re scared for our loved ones not for tomorrow but breaking someone’s heart.

A few days after I came back to United States I met Dr. Hammel, the doctor who saved my life and my leg. Dr. Hammel being the doctor he was wasn’t going to take someone else’s word for it so he did a biopsy the same day I met him. He told me it would be a few days before he heard anything from the lab…I got a call the next day and was forced to hear the dreaded words “It’s cancer.”

I was alone and scared but my mother came as soon as she could and stayed by my side and until the military told her she had to go.

My mother was my rock and still is. There isn’t enough thanks and gratitude that can be shown to the caregivers who help people through this terrifying and physically trying time. To all the caregivers in the audience I applaud you and I know the rest of the survivors do as well. You all are an intricate detail that cannot be forgotten when it comes to fighting and recovery. We couldn’t do it without you.

My treatment plan was limb salvage surgery. Dr. Hammel wasn’t sure if he would have to amputate my leg or not but he promised me he would do everything he could not to.

I woke up 8 hours later with my leg and my life forever changed. I had to learn how to walk again and face physical limitations I thought I would never have as a 23-year-old. I have used just about every walking device you can think of from wheelchairs working all the way up to canes.

The residual effects of having had cancer in your body are forever. We are never fully able to recover whether it is physically or mentally. When we go to the doctor we always have that worry in the back of our minds and our doctors always look at us a little more carefully.

So it’s hard to answer the question “but you’re okay now, right?” I always say “sure I’m great!” but in the back of my mind I’m thinking “Could you ever be okay after something like this?” I don’t think I’ll ever be okay but I will continue to survive and move forward with my life.

That’s what survivors do.

Tell us about your treatment:

Surgical removal of the tumor which included removing part of my tibia and my entire fibula and physical therapy.

How is your life the same or different now?

My life is very different now. I have a lot of pain and issues with standing, driving, walking long distances, I can’t run any longer due to the surgery. I am married with a son and I’m expecting another child.

How have your relationships with friends and family been impacted?

I lost a lot of friends because they pretty much abandoned me. I didn’t get many phone calls or text messages from people I grew up with and thought I was the closest with.

What do you want us to know about you?

I’m just another survivor who took a different path to recovery than most.

What advice would you give to others impacted by sarcoma?

I would like people to know that fighting through the darkness there is light on the other side.

What’s a random fact or piece of information you’ve learned along the way?

It takes a lot to walk. 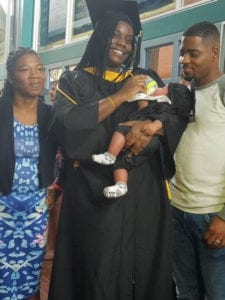 This question is the hardest lol. Anything delicious.

What books, films, or music would you recommend we check out? (Ones that have helped to carry you through your sarcoma journey or just ones that you’d generally recommend)

I love books by Sister Souljah.

What keeps you inspired and/or motivated?

My husband and my kids.

How are you doing today?

Today I am cancer free I still have a lot of residual issues from the surgery, but I am grateful for the life I have. I have a one-year-old son and I am expecting another child.