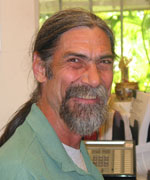 Dave Murphy is an active figure in the online sarcoma community, devoting his energy among various lists but especially to the sarcoma list for the Association of Cancer Online Resources (ACOR.org). His wife, Piera, died after a 15 month battle with Leiomyosarcoma, later diagnosed as malignant Fibrous Histiocytoma in 1999. Because of his strong personal belief in supporting this underserved community, he is well-known and loved by the many people who go to these lists seeking information and resources. Dave joined the Sarcoma Alliance Board of Directors in October of 2002 and in 2020 was given the title of Honorary Board Emeritus. He has represented the Sarcoma Alliance at conferences like American Association of Cancer Research, Oncology Nursing Society, Society of Gynecologic Oncology and the Connective Tissue Oncology Society. Dave is a retired Computer Lab Specialist from El Camino Community College in Torrance, California where he was in charge of nearly 400 computers in 9 computer labs on campus. He is conversant in Italian, French, and Spanish.