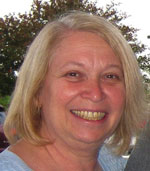 Joan’s daughter was diagnosed with alveolar rhabdomyosarcoma, a pediatric sarcoma, in 1996 at the age of 13. She successfully underwent a year of treatment that included twelve rounds of chemotherapy, 28 doses of radiation, and five operations at Omaha Children’s Hospital and at Mayo Clinic in Rochester. Joan is a biologist and works as an environmental consultant in Nebraska. Since 2001 she has volunteered for a variety of children’s cancer groups, including the Children’s Oncology Group (COG), ACOR Rhabdo-Kids, and Lincoln Candlelighters. On the Sarcoma Alliance Board she represents pediatric sarcoma patients, who make up roughly 15% of all sarcoma patients, helps manage the Sarcoma Alliance Facebook news feed, and has served as an Officer of the organization.